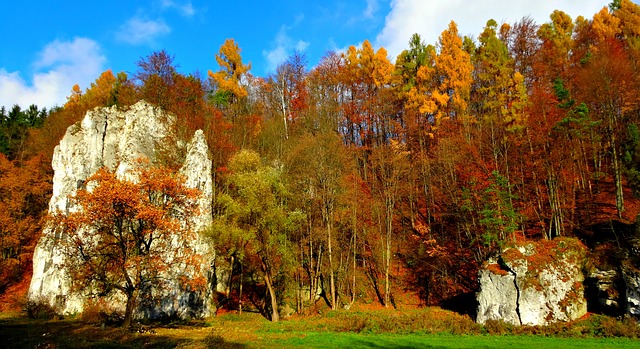 Located in the Malopolska province, Ojców National Park, despite its small size, is full of natural and cultural attractions. On its territory there are high limestone rocks of shapes and sizes unparalleled in other regions of the country, castles and an astonishing number of plant and animal species. Its close proximity to Krakow (ca. 16 km) makes it an extraordinary tourist attraction, which should be seen by everyone visiting the capital of the Lesser Poland Voivodeship and for its residents.

Nature of the Ojców National Park

The biggest attraction of the park are the walls of limestone rocks occurring in the Prądnik valley, a ravine several kilometres long, 130 metres deep and over 200 metres wide. The limestone substrate favoured karst phenomena, thanks to which over 400 caves and rock grottos were created there. Tourists are fascinated by magnificent rock formations, such as the characteristic Hercules’ Mace, the Cracow Gate or Deotyma’s Needle.
The natural wealth of the Ojców National Park amazes with the number of plant and animal species found there. The world of plants includes about 800-1000 species occurring there, among them many rare mountain species, the most interesting specimens include: obuwiki, steppe John’s Thistle, Ojców birches, post-glacial spotted pictures.
The park’s fauna consists of more than 5 thousand varieties of animals, including 134 species of birds, among them: hawks, woodpeckers, kingfishers, black storks.
You can meet there a rare species of snakes – spotted snakes. The large number of caves and grottos is a shelter for many unique species of bats, certainly the number of which has made the Ojców National Park a symbol of the bat.

A characteristic element of the landscape in Ojców National Park are charmingly situated castles: in Ojców and in Pieskowa Skała. The castle in Ojców was erected in the 14th century by Casimir the Great. The picturesque ruins of Eagles’ Nest, as the royal castles were called in the Middle Ages, rise above the rocky cliff of Castle Mountain.
The castle in Pieskowa Skała, together with Maczuga Herkulesa, are the best known attractions of the park in Prądnik Valley. The castle is even older than the one in Ojców, built in the 13th century, but it gained its characteristic Renaissance look after renovation in the 16th century.